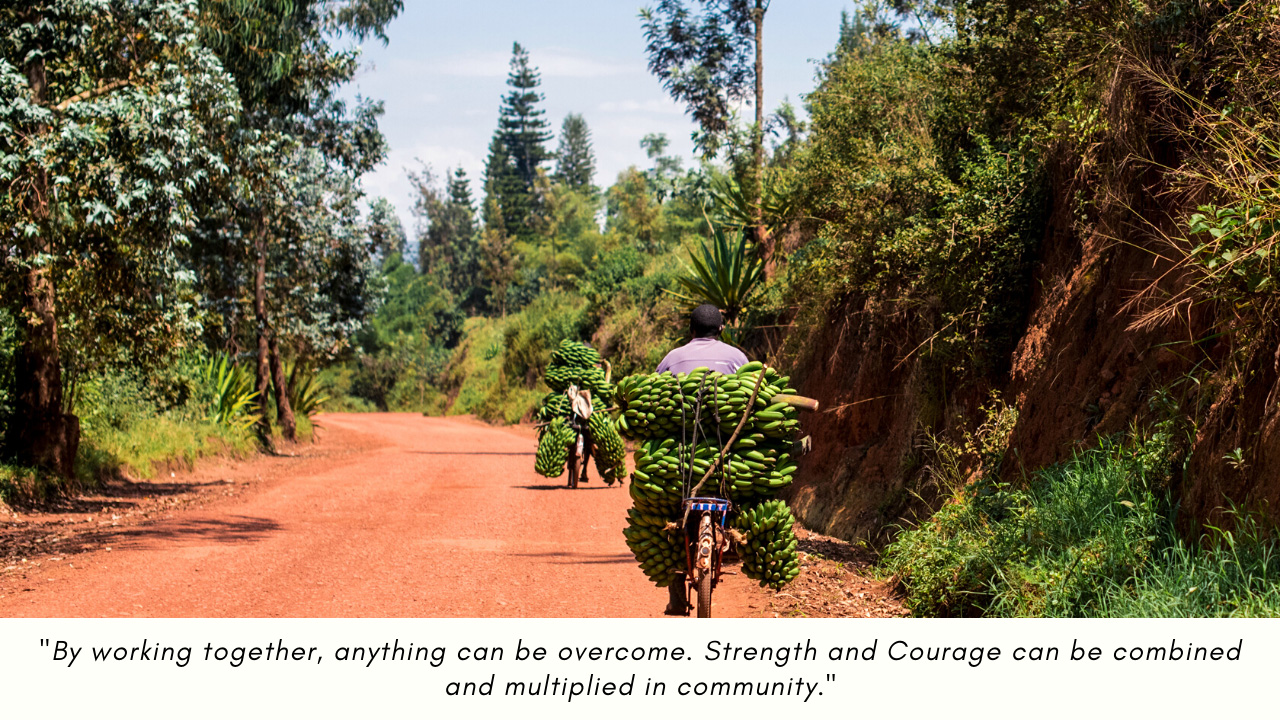 Recently, we were hosting a small team gathering in our home.  In light of the rains and the various dump trucks that have come through, it wasn’t an easily navigable path.  We forgot to give everyone instructions on the safest way to get here. Well, our bad. Our teammates called us.  They were stuck.  This is not uncommon, so I laced up and went up the cow path to give them a push but found that they were STUCK.  Instead of seeking to traverse the rough terrain, they thought they could avoid the problem area by cutting across the grass.  They didn’t know that the grass basically hides a small river – that now their car was sitting in.  After getting them and their kids out of the car and to our house on foot, and after we enjoyed a few homemade cinnamon rolls, we ventured out in my trusty Toyota Sequioa, armed with some strong rope to pull out the car.

What ensued taught me some important lessons about gaining strength and courage from community.

First, I received guidance. My Rwandan neighbor was there and helped guide me on how to tow a car out of the river.  He guided me in how to position my car for maximum torque and effectiveness.  We tied up the rope and were ready to go.  1.  2.  3.  I threw the truck in reverse and …. Snap.  The rope snapped like a twig.

“ In this community, strength and courage looks like perseverance – even when it’s not your problem. ”

But, no need to despair. The second gift of communal strength and courage was ingenuity.  My neighbor told me not to worry.  He was in the middle of building his home and quickly asked his workers to bring over some rebar.  That’s right, they built a stronger rope out of rebar.  It was amazing.  They measured, they sawed, they used a hollow pole for leverage, and then they fastened the rebar to both vehicles tightly.  Excited, I got the truck started and ready, but still made minimal progress in pulling the car out very far.  The terrain was such that we didn’t have much wiggle room.

And yet, they (my community of strangers) didn’t give up. We dug. We placed rocks for traction. We placed bigger rocks for more traction. In this community, strength and courage looks like perseverance – even when it’s not your problem.

After about the tenth try, the beads of sweat were dripping down everyone’s faces.  Patience was wearing thin, and hope was fading.  But, it is a cultural norm here in Rwanda for bystanders to rush to the aid of any vehicle in danger or a tough spot.  More and more passers-by stopped and offered help.  Finally, the foreman, shouted Tugende, which means come.  Many more people came, about 15 in all.  The next gift of strength and courage my community gave me was strength in numbers. After all the low-tech and high-tech methods of physics that had proven fruitless, it came down to this: They instructed us to put stuck car in reverse, and on the count of three, they literally pushed and lifted the car, up, out of a ditch, through a muddy riverbed, until the car was stuck no more.  They cheered, they laughed, and they rejoiced.

Over the last five-plus years, this story is indicative of the Rwandan people.  They are overcomers.  They are strong.  They are courageous.  They have taught our family so much, and if the world looks in, there is a lot to learn from them. By working together, anything can be overcome. Strength and Courage can be combined and multiplied in community.

To the Rwandan people, murakoze chane.  Thank you very much for who you are and all you’ve taught us.

What lessons are you learning about strength and courage in your country?  What more would you want to know about Rwanda?